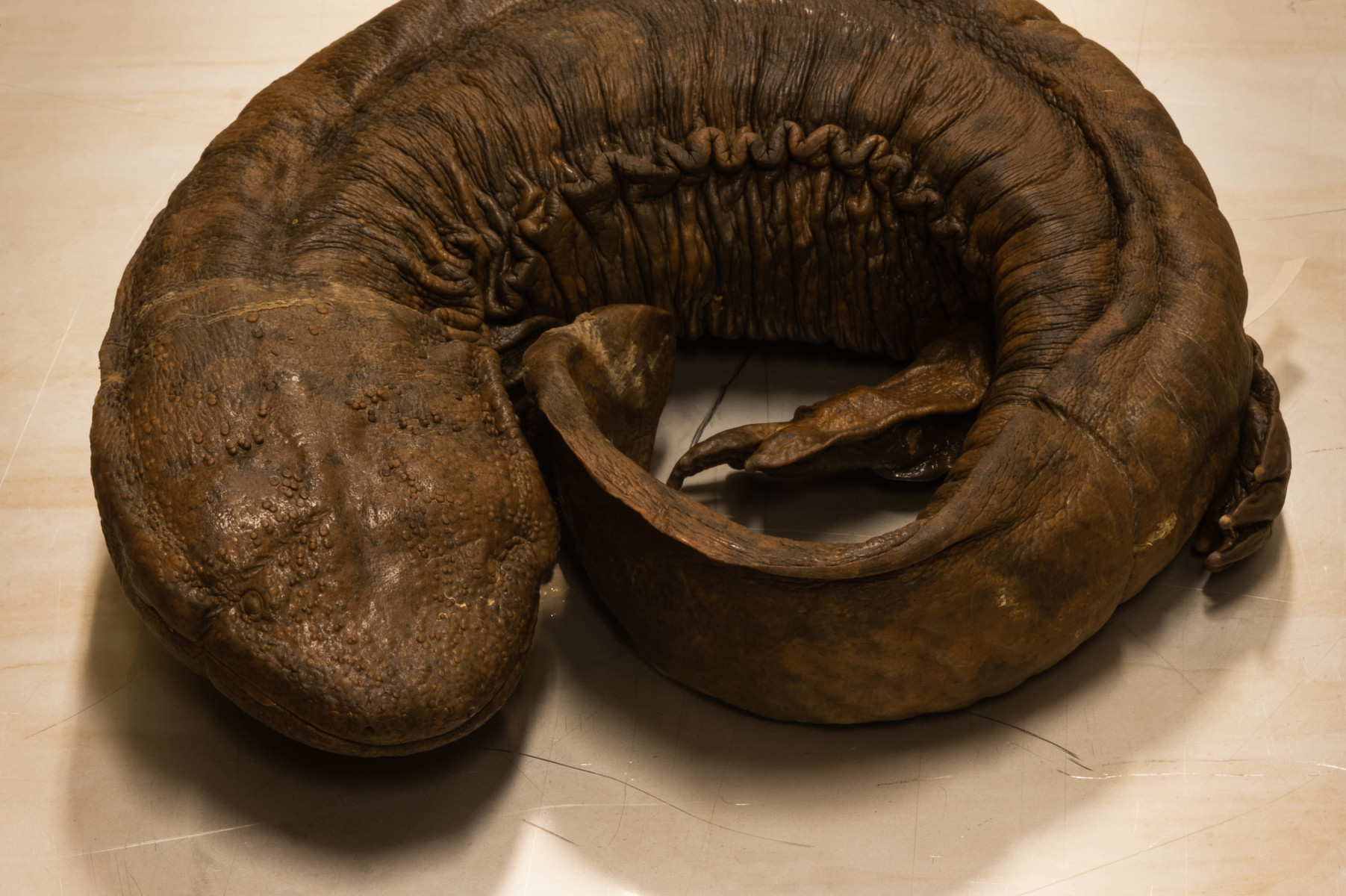 The Chinese giant salamander is the largest amphibian in the world, reaching a length of up to 1.8 metres and over 60kg. The species is entirely aquatic but does not have gills, absorbing oxygen through its porous skin. A. davidianus has very small eyes and relies on smell and touch to find prey. Research published in 2018, using the latest tools for genetic analusis, found that rather than one species, there are at least five and perhaps as many as eight species of Chinese giant salamander. Currently they are found only in China in cold, fast-flowing tributaries of the Pearl, Yellow and Yangtze Rivers but once ranged from rocky mountain streams to subtropical waterways.

Chinese giant salamanders were once abundant but have suffered a dramatic population decline of more than 80 percent over the past 30 years. The main factor contributing to this is over-exploitation for the food market, as the salamander’s meat is considered a delicacy in China and is traditionally eaten to benefit heart and skin conditions. In the 1960s, in a single prefecture in Hunan province, 15,000kg of the species’ meat was harvested each year. A decade later, the take dropped to around 3000kg and has been declining since. Given their large size, however, the amphibians are easy to catch and their flesh sells at around $100 USD per kg and harvesting continues unregulated. Since the 1970’s the salamanders have been abundant enough in lucrative farms that are encouraged by the Chinese government to release farmed individuals into the wild as a conservation strategy. However, in light of the recent fact that there are more than one species and given that the Yellow River lineage is most abundant in farms, this effort is deeply flawed. Farmers have been accidentally contaminating China’s rivers with the wrong species, resulting in hybridisation and homogenisation of the gene pool – a warning that saving species requires proper classification before setting conservation strategies. Populations of the salamanders are now small and fragmented and individuals tend to be much smaller than in the past. Other threats to the species include habitat destruction and siltation of their waterway habitat from deforestation.

In 1999, a 99,975 hectare area in Mount Wuyi was declared a UNESCO World Heritage Site, a step towards protecting some of the remaining Chinese giant salamanders’ habitat. However, conservationists argue that the key to all of the species’ survival is cultural and education is key. As Ben Tapley, the head of the reptile team at the Zoological Society of London, explained, ‘The Chinese giant salamander has been dubbed the ‘fresh water panda’ and as the country’s most iconic aquatic species, it should be recognised more widely as a national treasure. If we protect the salamanders and the habitats in which they occur, we can also protect the myriad of other species living in these rich ecosystems. Watershed protection has a huge direct benefit to humans. It is important that we recognise that what is good for the Chinese giant salamander is often good for people, too.’